It's birthday time for both of my boys. Though 2 years apart, their birthdays are 6 days apart, so it's natural to have one party for both. With both boys (turning 6 and 4) being huge fans of kids TV show, The Octonauts, finding a theme for this years party was easy peasy, and producing the parts was challenging and fun! Here's what I came up with (and some fun ideas to try - if you're doing one too)... 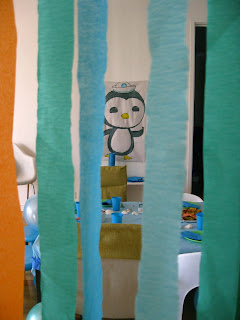 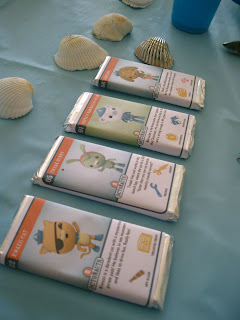 Easy party hats and eye patches were made with coloured card. A 'party room' was set out within our open plan playroom, using walls of seaweed (streamers). Inside that space we set up a central table, set with sea shells, small sea creatures and the food. 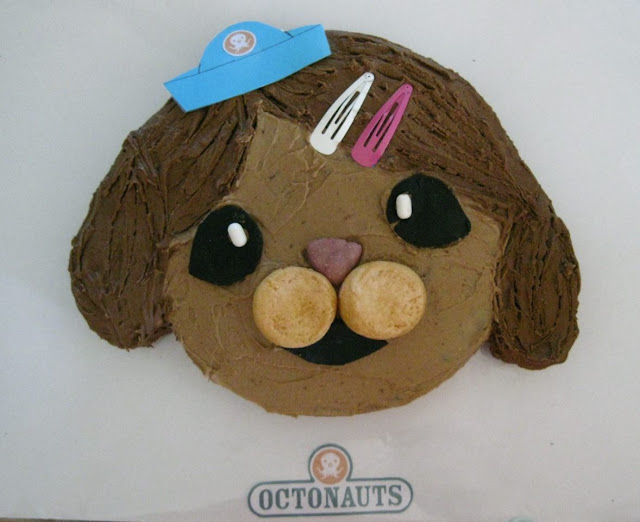 The 'coral' and 'fish biscuits' were homemade cheese puffs, the chocolate bars were re-badged with Octonaut characters, various confectionery items became 'electric eels' and 'blob fish'. 'Octodogs' (made by slitting legs through red-skinned hotdogs prior to cooking) were served with 'ink sauce' (tomato sauce tinted with blue colouring!) 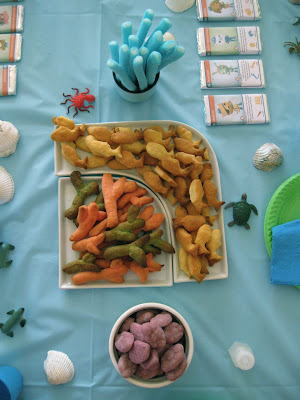 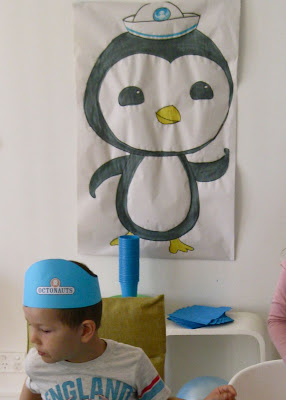 A large hand drawn 'Peso' poster on the wall became a game, following an episode of the Octonauts where he wins an "Iron Clam" award, we had the children 'pin the clam' (a silver painted shell - each with a childs name inside it) in his hand - blindfolded. Later the children were given a treasure map and were sent on a hunt to find their treasure boxes (which would be their goodie bag to take home). 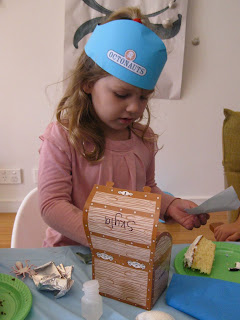 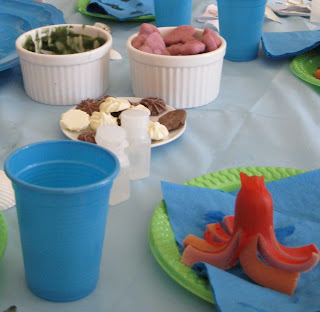 Finally, sharing a party is one concession, but I wanted the boys to have a cake each, so they can blow out their own candles. They were each quite sure about their favourite characters, which were not so tricky to replicate in cake form: Dashi (above) for 4 year old Hugo, and Captain Barnacles for Dylan, 6. 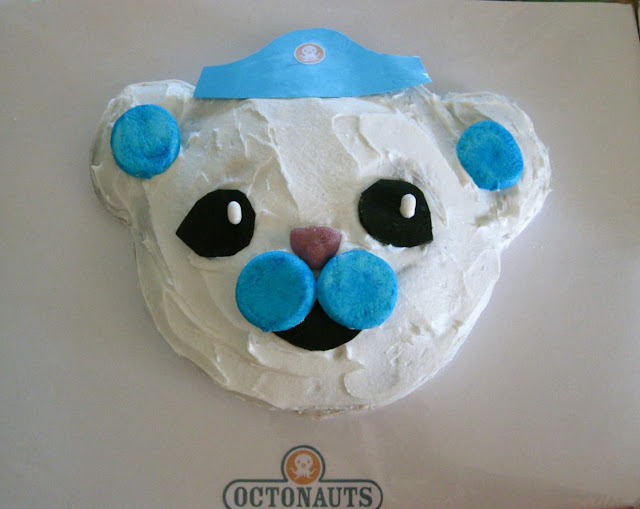 A fun party, and I'm exhausted! I should have remembered after last years party! Now, who's got the vino?

*EDITED: Check out the comments section for loads of FAQs. Seems Octonaut parties are still awesome and our little party has inspired ideas for yours!
Posted by ninaribena at 8:45 PM 20 comments:

The ReLoved collective of designers are enjoying our pop-up shop, with thanks to the You Are Here festival of fabulous indie events. Open for 3 days only, we close on Sunday afternoon with a clothing swap (LOVE!). If you haven't been along yet, here's what you might find... 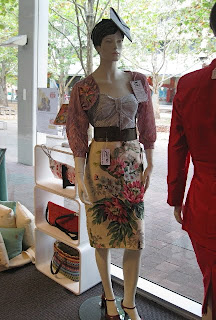 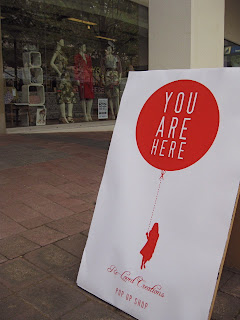 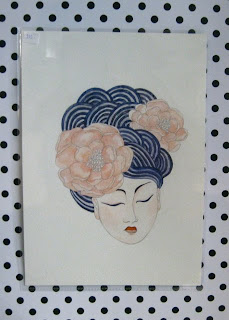 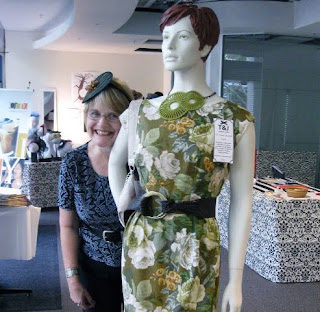 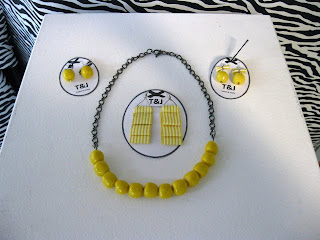 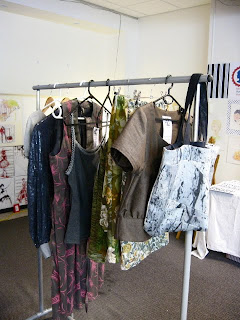 but that's if we don't sell out first!
Come along to the clothing swap, bring some of your unwanted clothes - and leave with something you do want! Instant wardrobe update, and left overs go to Vinnies.

We're at the old NRMA shopfront (on the outside of the Canberra Centre), City walk - between Sportsgirl and Birkenstocks. Gorgeous, gorgeous gorgeous!
Posted by ninaribena at 4:24 PM No comments: 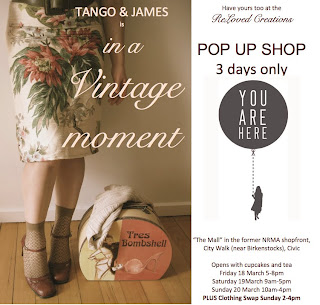 “The Mall” in the former NRMA shopfront,

Opens with cupcakes and tea

Showcasing local designers maker, artists and illustrators in a temporary shop located in the city.
Join the facebook page here, and drop in to the shop to buy something fabulously original.
Posted by ninaribena at 3:43 PM 2 comments:

Her Canberra feature: She's Got Style

Make sure you visit and have a read of the most fabulous words ever written about moi, and for a tour of my home... and they even spill the beans on the amazing news I alluded to a couple of posts ago! (squeeee!). 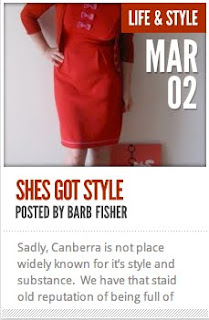 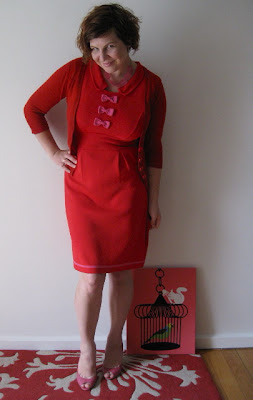 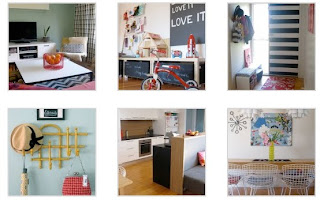 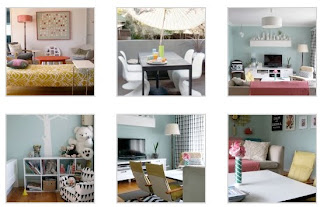 A most exotic thank you to friend, creative equal, and super stylish Barb Fisher for the feature and articulate and kind words.

Follow the link to HerCanberra above for even more fabulousness, updated daily. xx
Posted by ninaribena at 12:46 PM 1 comment:

ninaribena
I'm a mummy and a maker. I'm a designer and a salvager. I'm thrifty and handy and I can't control my creative itch!

Things I make are on sale here...
My Blog about Style in Canberra is here...

My Home is featured here...
www.flickr.com

This is a Flickr badge showing public photos and videos from Ninaribena1. Make your own badge here. 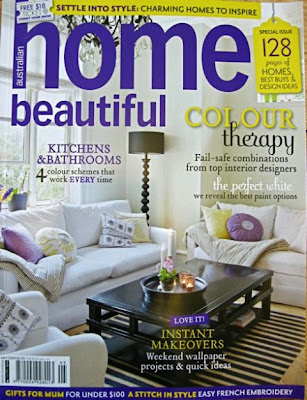